6-27-12
The temps here have been in the 100s this week.  I’ve been watering the garden every evening hoping to keep it from burning up from the sun.  Today I discovered that the sweet banana pepper and bell pepper plants had scrubed to the heat.  The peppers on each plant had sun burn spots on them so I decided I’d gotten my share and decided not to water them anymore.
I picked the corn today.  Sad harvest.  The ears had 1 worm each and some had ants and/or some kind of long thin black bug.  The bugs had eaten anywhere from a quarter to half of each ear.    I only 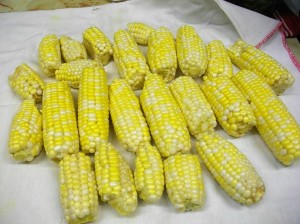 picked 25 ears and out of that I was able to only put 6 away, in the deep freezer, for corn on the cob.                  I cut the rest of the corn off the cobs to make some Corn Relish.  I didn’t have any garlic so I waited till Sat. to make the relish. (Friday shopping)  A couple of years ago I made a Zucchini and Corn Relish that you could pour over your pan fried chicken breasts.  I wanted to make something similar, so I invented a recipe using ingredients I had on hand.  See the July 1 post for the recipe.

6-28-12
With the sun blaring down on my tomatoes I was concerned about them getting burned up.  I was thinking, during the day, about how I could shade them a little.  My Dad used to put 6 fence posts up, two on each end of the row of tomatoes and two in the middle.  When the days started to get too hot he would then lay a piece of rebarb, he had laying around, on top of the tomatoes. (Hog fencing would work also.)  He would use wire to tie the rebarb to the fence posts.  Once this was done he would take the old corn stalks and lay them on top to shade the tomatoes.  He always had beautiful bushy tomato plants that grew up through the rebarb and then they ended up shading themselves.
Anyway back to shading my tomatoes…Having the corn stalks in mind I decided that I would lean some of the corn stalks against the West side of my tomato plants.

One response to “Corn Harvest and Tomato Shade”